On a bright April day last year, I managed to grab a quick lunch with Sareeta Domingo. She’d whittled an hour out of her fiercely busy schedule to chat with me. To be safe, we ate at the Pret a Manger off London Bridge, a short walk from the Harlequin Mills & Boon office where she works as an editor.

When we spoke on that April day, Domingo was a published author with a romance novel (The Nearness of You) and an erotic novella (The Confessional Diaries of a Girl in Town) under her belt. In the months since that interview she has released Love, Secret Santa, a sweet Christmas romance for teens, cued up Love on the Main Stage – a summer romance for teens – for release this month, she has a July novel coming as part of Jacaranda’s 20 for 2020 campaign called, If I Don’t Have You, and she’s worked with a clutch of remarkable writers (including Dorothy Koomson, Daniellé Dash and Sara Jafari) on a new anthology celebrating women of colour in love called, Who’s Loving You (due out in Feb 2021). All this alongside the full-time, full-on day job.

Yet there’s more. If you attend a Black publishing event in London (pre-pandemic of course), you’re guaranteed to catch sight of her. Book launches, panel discussions, bookclub events – she shows up and supports fellow creatives, indie publishers and anyone working to make UK publishing more inclusive. She’s also started doing a weekly ‘book of the week’ segment on Morning Mari (@marinx666) on @worldwidefm.

Where does she find the time? How does she juggle it all? We’ll come back to that.

On that April day we started our chat with Domingo’s unusual childhood. It began in Camberwell, South East London, shifted to East Sussex, then to Bahrain when, aged nine, her father’s work took the family abroad. At 16, Domingo and her twin brother returned to the UK to complete their A-Levels at boarding-school. Domingo studied Comparative American Studies at the University of Warwick. It was there she made her first foray into writing when she took a creative writing course while on a year abroad at the University of California.

After Warwick she felt adrift. She moved back in with her parents in Tunbridge Wells and worked at the local Ottakar’s bookshop while she considered her options. She was surprised to find she loved selling books. Tentative plans began to fall into place.

“Once I decided – okay publishing, maybe that’s a thing I can work on – I applied to any and all entry level jobs in publishing.”

She got a job in the sales and marketing department of (what was) Chrysalis Books. There she worked in the remarkably uncreative role of stock controller, managing the stock levels in the warehouse.

“It was fine. It was a job. I was in my early 20s so I wasn’t that fussed about what I did for work. I was more about the leisure time.” 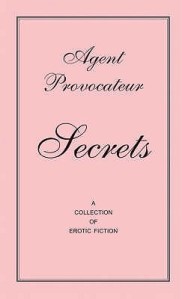 Her official job may not have been creative but when Chrysalis got a contract to publish books for the steamy Agent Provocateur series, Domingo saw an opportunity.

Her boldness paid off. The publisher liked her writing and commissioned her to write two short stories.

Her next stop was Hothouse Fiction where she worked as a writer/editor – “I applied for it because I thought I’m half of that, I’m a writer, technically.” It was a refreshing change from the logistical roles she’d held. At Hothouse she developed ideas for children’s books, commissioned writers then pitched the stories to publishers.

“It was a bit agent-y, a bit like an author, and obviously, editing as well. It was a real learning experience and it really helped you learn how to craft a book because we were coming up with the story lines. It was an amazing place to learn.”

(It’s not difficult to draw a line between her work at Hothouse and the romantic anthology with a roster of celebrated literary names that she would put together years later.)

While at Hothouse Domingo started a blog called, The Palate Cleanser where she’d review contemporary romance novels. Analysing the work of other authors gave her a solid grounding in the genre which she parsed into her own full length novel, The Nearness of You. It was published by Piakus in 2016.

Feeling that she’d gone as far as she could at Hothouse, Domingo quit and went freelance.

“When I went freelance I combined the fact that there are so few editors of colour with my interest in romance.”

She undertook editing work for Cassava Republic Press’ romance imprint, Ankara Press. She also worked with Jacaranda Books. When commissions were quiet she did some part-time bookselling to keep the bills paid. And then she saw an ad for an editor position at Harlequin Mills & Boon. It seemed like serendipity.

She got the job and joined Harlequin Mills & Boon’s UK team. She was the only Black editor.

Mills & Boon was founded in 1908. Over the last century it has played a pivotal role in the growth of the romance genre. Its modern incarnation operates quite distinctly from other publishing companies. It is split into a range of specialties: Medical, Historical, Modern/Presents (glamour, billionaire men), and the now-defunct Dare (explicitly sexy), etc. Domingo acquires books across all the specialisms but sits on the Presents team. She has a pool of roughly 17 authors that she works with, shepherding them through the various stages of their books. Presents releases eight books a month maintaining the volume with a steady stream of new authors pulled from a teetering slush pile of submissions.

If you’ve ever entered a bookshop and gone searching for a Black British romance novel you’ll be aware of how rare they are. It’s a problem Domingo is acutely aware of and would dearly like to see improve.

“It’s absolutely a challenge. It does feel like searching for a unicorn to find particularly Black British romance authors.”

“She’s doing a lot of the heavy lifting in terms of the representation that is badly needed in writing African characters.”

The closing of Kimani, Harlequin’s African American imprint, in 2017 was met with shock. However, many authors from the line have been absorbed into other imprints and Domingo believes it could ultimately be a positive move.

“There’s that risk of having authors of colour [siloed]. It would be nice to just pick up any book from any line and know that I can find something that represents me in any of these books.”

It brings us neatly around to Domingo’s own writing. How does she fit it all in? The writing alongside the demanding day job?

“I get up early. I write before work and in the evening. It’s a lot of juggling.”

It sounds like the understatement of the universe. I’d hazard Domingo hasn’t slept since she left Warwick University. I’m so excited to see where she goes next. I think of her as a tsunami, quietly but definitively changing the publishing landscape. We’re all better for it.

Sareeta Domingo
Sareetadomingo.com
Love on the Main Stage
Love, Secret Santa
The Nearness of You