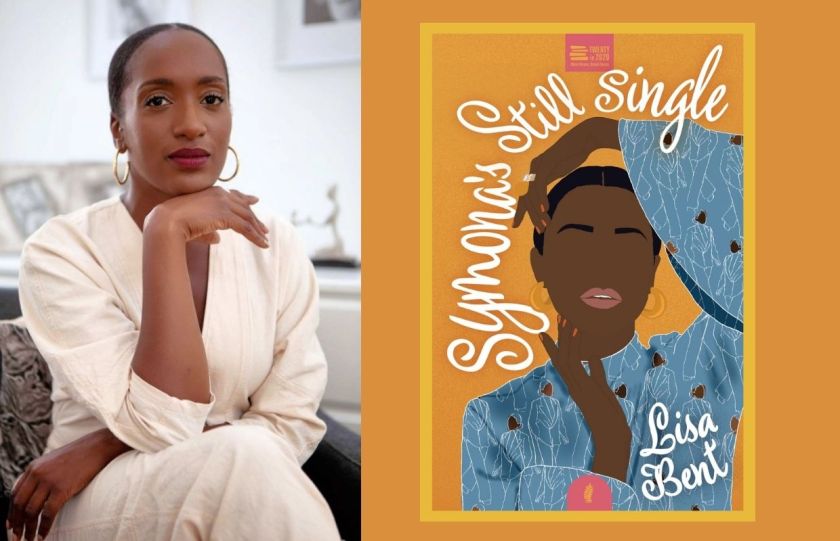 In September 2020 Lisa Bent released her debut novel, Symona’s Still Single, the story of a 37-year old Jamaican British woman looking for Mr. Right while trying not to panic at the loud ticking of her biological clock. Symona’s Still Single was launched by indie publisher, Jacaranda as part of their ground-breaking #Twentyin2020 initiative whereby they would publish 20 Black British authors in one year. It’s a funny, charming romance made richer with stories of female friendship. Lisa’s counselling degree and belief in the power of continuous self-reflection colour her writing and are visible in the experiences and adventures of Symona as she searches for love.

I put 10 questions to Lisa and she provided some fascinating answers.

1. How did you hit upon this idea for a book?

I was a social commentator on Facebook. From politics, bus antics to social issues and dating trials and tribulations, I made my opinion known. My dating posts always created the most interest, but it wasn’t until December 2017 that I realised I was onto something.

My encounter with MR TK Maxx, caused a stir and this was the trigger that pushed me to write the book. The beginnings of this encounter appear in chapter 22. The real life story has been embellished for fiction.

2. Why is it important to see Black women in love in art?

Pain and trauma is part of the human condition, but for some reason it appears firmly attached to our narratives. Joy, empowerment, wealth, happiness and love exists for us too and it is vital these stories are told. Not just for Black women, but for Black men too.

In a prejudiced society, the love we have for ourselves and those who look like us is necessary to continue healthy connections and unions. The term Black love is relevant today and art, in its many mediums, should work to rebalance the negative stereotypes. Who we are, is not what we have been told. Reshaping, retelling, redefining the narrative from our truth, is our responsibility.

3. How important was it to talk about therapy and emotional pain and healing in regards to forming and maintaining relationships?

Although the stigma around mental health is changing, I think the UK is still behind in embracing therapy. Entering a talking space doesn’t only have to happen when you are at breaking point, grieving or struggling. It is a safe space you can enter at any time to evaluate where you are at. Like the seasons, we also change. However, more often than not, our views about ourselves and the world remain the same.

As a qualified counsellor, I wanted to shine a light on the importance of the work we do through Symona’s story. Within, there are two short sessions with two different counsellors, giving a taster of what a session looks like and feels like. As her journey continues, I show how her ability to reflect, process and own her actions occur, as a result of her therapeutic  experience.

In the conversation of forming and maintaining relationships, we are at the centre. It starts with us and extends out to others. As a result, we hold the keys that provide the answers to a lot of questions about our relationships. The relationship we have with ourselves informs others. This is a perspective rarely acknowledged, which I wanted to highlight.

4. Which writers have inspired you?

5. How did the opportunity to publish with Jacaranda come about?

Valerie Brandes, the founder of award winning publishing house Jacaranda Books and Joy Francis from Words of Colour, set a competition to find 20 Black British Writers and  publish them in 2020. I submitted my work and was one of the lucky 20 chosen. My book was released on 8th October 2020 in partnership with Foyles and Audible.

6. Are there any changes you would like to see in the UK publishing industry?

Jacaranda books are a small, Black owned independent publishing house founded as a result of the lack of diversity within the industry. Their competition proved what we already know; there are talented Black British writers with a wealth of untold stories, that have a waiting audience.

I am part of the Black Writers Guild, founded by Afua Hirsch, Nels Abbey and Sharmaine Lovegrove. They are doing amazing work behind the scenes to make long lasting, meaningful change.

I would like the publishing industry, in fact all sectors, to represent at all levels the diverse society we live in. There is talent everywhere. The gaze and mindset needs to shift to recognise it. Less talk. More action.

7. What was the writing process for this book like?

I had to acknowledge very quickly, that my corporate brain wasn’t going to help me create. It took me about two months to get out of my head and into my flow. A strict morning routine, regular breaks and not worrying about the word count helped.

I began to enjoy the process after the second draft. By the third and final draft everything just came together. Ensuring the story moved forward page by page was the goal. I knew my characters inside and out and cut out things that didn’t match their personality or didn’t flow.

8. You’re now working on a screenplay adaptation. How is that process different to writing the novel?

I’ve never written a screenplay before, but I would like to think it’s easier because I’m the author. That’s what I’m telling myself anyway lol.

There are more considerations to make. For example, the start of the book may not be the best place for the screen. Flashback moments may work better in present time.  A novel is longer than a screenplay, so what am I going to say in a shorter amount of time? What will I show and why? What will my characters say with more dialogue? A lot is left to the reader’s imagination in my book, on screen greater clarity is required. I’m going to have to be ruthless to complete it, but I’m embracing the journey.

9. If you had to fantasy cast the main parts of Symona’s Still Single, which actors would you choose?

Every time I wrote the dialogue for Adisa, Yvonne Orji came to mind, so perhaps that’s a sign lol. As much as I would love to head down fantasy land, I would like to cast talented Black actors who haven’t yet caught their break, due to gatekeepers blocking progression, because there are six successful Black actors on the scene already. They worked hard to get there, so I’m not knocking that, I’m just acknowledging the same problem in publishing is the same problem in film and TV.

As a new writer who was given a platform, I would like Symona on screen to do the same.

10. You’re a presenter, speaker, panellist, counsellor, writer and more. How do you juggle your different callings?

The large part of my career has been in corporate. I’ve been a HR Business Partner for the last eight years and the roles listed have run alongside well. I decided to resign in December 2019 to focus on completing my debut novel. It wasn’t an easy decision to make, but it had to be done because I knew I needed the space and time to imagine, write and meet my deadlines. It is a decision I am so glad I made.

Each role has a different skillset but people and communication are at the centre. My calling is to invite people into further self-exploration through different mediums. A jack of all trades on the surface, aligned to my purpose at the core.