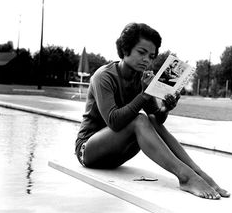 It’s summer. Unless you’re truly unlucky you have a few days of freedom coming up. While you’re lounging in the sunshine, sipping on that Mai Tai, you should read a book. Here are five fantastic suggestions:

A young woman, desperate to catch her flight out of Chicago’s O’Hare accepts a lift from an illegal Nigerian taxi, a kabu kabu. Never mind that the taxi is far from its proper environs. She soon finds herself sharing the ride with a procession of unusual and unsettling characters.

Debbie Doesn’t Do It Anymore by Walter Mosley

After starring in hundreds of films, super porn-star Debbie Dare has been disillusioned for a long time and is starting to phone it in. Then, one day, not only does she unexpectedly pass out having the most intense orgasm of her life (and first in years) while filming a scene, she also returns home to discover that her husband and an underage girl are both dead in her bathtub after being electrocuted while filming an amateur sex tape. These events rock her world and sets into motion massive changes in her life.

Both fans of Mosley and newcomers to his work will be pleased.

‘Til the Well Runs Dry by Lauren Francis-Sharma

In a small village in 1940s Trinidad, 16-year-old Marcia is raising two boys on her seamstress wage. She is also guarding a family secret. Her life is soon upended by Farouk, a man so besotted with her he enlists a medicine-woman to guarantee his feelings are returned. What follows is a love story pounding with the sounds of Calypso, the scent of sea salt and spicy stews and the thrilling twists and turns of a relationship amplified by magic and threatened by global politics and family secrets.

Wife of the Gods by Kwei Quartey

“The forest was black and Darko was afraid to enter…”

So begins this lyrical Ghanaian mystery. DI Darko Dawson is ordered to investigate the murder of a young woman in Kentau, the town from which his mother disappeared many years before. Fighting an incompetent local policeman, superstition and a local priest to whom young women are given as trokosi or wives of the gods, Dawson sets about trying to solve both mysteries and prevent an innocent man from being hanged.

Heart of Gold: A Blessings Novel by Beverly Jenkins

The small Kansas town of Henry Adams was founded by freed slaves and rescued from bankruptcy by wealthy divorcee, Bernadine Brown. As part of her campaign to re-energize the town Bernadine offers a group of foster children permanent homes with town residents. Heart of Gold is the fifth novel in a joyful series that delivers heart-warming tales of family and friendship and prompts the reader to recognise how present these things are in all our lives.