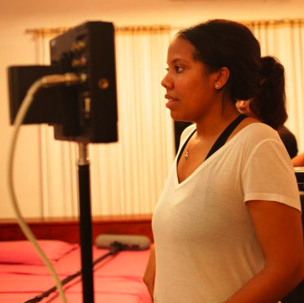 Since it launched in March 2014, the web series An African City has attracted thousands of online viewers and scored a ton of critical acclaim for its bold approach to sex, its multifaceted female protagonists and its dazzling aesthetic.

I spoke to the show’s creator and writer, Nicole Amarteifio about her creative process, feminism and what it takes to fulfill a dream.

I was born here in Ghana. But shortly after the December ‘81 coup my family decided to leave. First we went to England, then after about seven years we moved to America where I spent most of my life. Even as a child growing up in America I always knew that I wanted to go home, and home was Ghana. So shortly after college I made the move back.

I remember one of my first bosses out of college, she loved my writing. It gave me that confidence, that bounce in my step. I started writing poetry and poetry turned into a chapter of a novel. When I was in grad school another professor was very encouraging, he showed me how to write screenplays. When I decided to do the African Sex and the City I thought of all the people who’d encouraged me in my writing. I could hear their applause.

I had no idea how to go about [creating a show]. I kept saying: “how am I, one day, going to pitch this to a big scary network?” My professor at grad school was like: “just write!” I took his advice and wrote and wrote and wrote. And then in Feb 2011 Issa Rae came out with The Misadventures of Awkward Black Girl and it just hit me like, ‘wow, I don’t have to go pitch my idea to a big scary network, I can just call some of my friends and we can put this on YouTube. YouTube can be our network’. That’s how I was able to take it from a dream to a reality.

I’m part of a network called Diaspora African Women’s Network – DAWN – made up of great women doing great things in African policy, etc. I mentioned to one of the members that I had this idea and she knew Millie [Monyo], she said: “Millie’s a TV producer in New York, she’s Ghanaian-American, you two should meet.”

Luckily Millie had had some experience working in TV production here in Accra. It was very important to me that we had a top quality production that was done by Ghanaians. Millie had worked on a production with Sparrow productions by Shirley Frimpong-Manso and had some connections so we hooked up with them.

It was [difficult]. We had auditions, first in New York. I have this philosophy that if you have a character who’s Ghanaian but raised in America you should have an actress who’s Ghanaian but raised in America. It was very important for me that the actresses really understood their characters. We found three of the girls in New York and then we had auditions here and that’s where Marie showed up. Marie we knew because she acts in Adams Apples which is very popular. And then Maame who plays Zainab, I just think she’s so beautiful and I went to high school with her for one year. I then bumped into her at an event and I said: “you have to be in my show. The camera will love you.” She didn’t audition, she didn’t even read. And she had never acted before. The other four actresses are professional actresses, trained in theatre and film etc so she says she got a lot of support on set from the rest of the cast.

We would meet with different designers and tell them the look of characters and they told us what they had that would fit character x or y. We were very lucky in finding a lot of designers who were very supportive of the show. That’s evident in all the great pieces we were able to get.

It was very important to me that when you look at the show you see designers from top African [fashion houses] and up and coming designers – Christie Brown, Ame’yo, Osei-duro. If you listen you’ll hear music that’s not from America, it’s not from Europe, these are African artists, on the continent who are producing and making wonderful music. It’s supposed to be a platform for all kinds of art.

In episode five – Nana goes to the hairdresser for a wash and blow dry and the stylist says they don’t do natural hair. That really did happen to me in 2006. I walked into a salon with natural hair and she looked at me like I was an alien. Things have changed now though, there are more and more salons that can handle natural hair.

The five women have jobs. They’re great at the work they do, that’s what enables them to afford their lifestyles. When you get to a certain age and you don’t have children, that’s a lot of disposable income. I put a lot of my own savings into doing this web series. If I had a child I wouldn’t have been able to afford that. That’s how I see the girls. They’re women with good jobs that pay well so they’re able to wine and dine at the best restaurants.

Everyone in the production crew except for the production assistants were male. However, it meant they had a great take on the show. If they were laughing, if they were relating, it was a great sign. It was like testing the market. We would do a scene and I’d get the male perspective. In the writing process there were so many women from my life involved. It was actually a nice balance for this production.

Working in international development, I only see the story of the African woman who lives in poverty, who has HIV, who has kids and you need to advise her on how to provide the best for her child’s health, ie use those mosquito nets. It was just one story of the African woman and I wanted to change that narrative. I wanted to show that there are African women who are smart, witty, intelligent, classy, glamorous, there’s another story. There are some people who complain that I went too far, but the way I see it, the next filmmaker can come up and show a middle ground. There’s room for many, many stories.

What I love about the series is that yes there are things that might be unique to the African woman but in the same breath many things are common to all women. I know that for me, as a returnee, I can be sitting in the hair salon and my hair stylist who has never left Ghana has never been to America, she’ll be complaining about her boyfriend in the same way that I complain about my experiences. It’s the same. Unbeknownst to my hair stylist, the same things she’s saying I’ve heard from female CEOs in New York. You can be sitting in Kansas or sitting in Accra and there’s some family member who’s pressuring you about marriage and babies. It’s a global experience, all part of the collective sisterhood.

The big thing to me about Ghana society was realising that it really is a man’s country. The issue of being faithful in a marriage – that is probably what shook me when I got back here. There’s a lot of adultery that happens in the United States but it just doesn’t feel condoned, but in Ghana it felt like it was okay, it was more acceptable. [The attitude was] If your man’s not beating you, what are you complaining about?

These are short 15-minute episodes. I can easily write one draft in two days. I can fine tune it and get a final in three days. Then it’s always being edited. Something will happen when I’m driving to my local supermarket or I’ll get a phone call from a girlfriend that will inspire something and I’ll need to tweak something, so it’s always in the editing phase.

I want to have a [writing] team for season two. For me I like to write what I know. Some of the audience are asking for things that I feel like I can’t authentically write. The writing team is definitely going to grow.

Some Saudi prince will come and give us millions and millions of dollars to do a season 2, 3, 4, and 5. Did I say millions? I meant billions. That would be my dream for the show. We’ve just now started talking to TV networks but I don’t want any kind of compromise. If we do sell to a TV network it has to be financially viable and not a compromise. I love being on the web. In Ghana usually when things go on TV they can’t tell you how many people watched it, how long they watched it for, where in the country they were when they watched it. But on YouTube, you can get all that data. You see instantly how many people are watching, how many people are liking it. The social aspect of putting something on YouTube is great.

All 10 episodes of season one are now available.