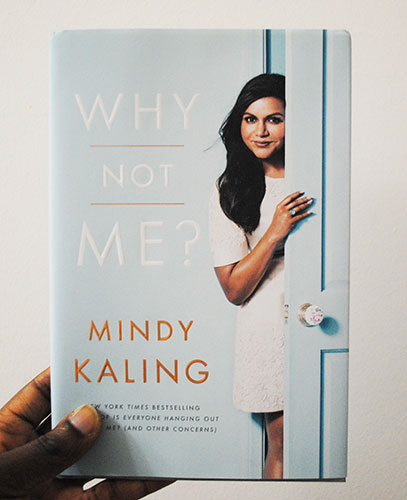 During summer my Twitter feed informed me Shonda Rhimes would be writing a memoir. I made a mental note to get it next year when it was released. I should have known that a woman who successfully juggles three primetime TV shows would be just as efficient about putting together a book. Still, I gave a squeal of delight when my friend waved the hardcover tome at me in the quaint bookshop we had been picking through.

Had I been in Canada I would have needed to squash down my frugal sensibilities to purchase it, but we were shopping in the beautiful Garden District of New Orleans where the hardcover cost $24.99 instead of Canada’s recommended retail price of $32.99.

I figured while I was there I might as well pick up another book I’d been salivating over; Mindy Kaling’s new biography, Why Not Me?

Is Tiffany-blue a thing right now in the publishing world? Or is it simply reserved for book jackets written by successful women of colour? I have no idea but the hue has a sophisticated slash charming appeal that makes my heart sing.

As for the third book: I was searching for a New Orleans guidebook in my local library when I wandered into the fiction aisle. I spotted a cover with a man wearing the traditional Yoruba agbada. Sold! (I’m always looking for new Nigerian writers.) The book blurb described it as a ‘dark comedy about disaster capitalism, cutthroat politics, and the corporatization of water.’ I’m always up for some African futurism, especially by a female author. My interest was piqued.