Last year my mother’s secondary school friend came to spend Christmas with us. We were settled in the living room, slumped in the obligatory post-turkey coma-haze, when this five-times-a-day praying, Muslim grandmother pulls out a battered paperback. I could see the cover from across the room, the pert, white woman with flowing hair and translucent billowing gown, clinging to her shirtless, muscled white, male love-interest. The cover design was so typical of Mills & Boon I barely needed the M&B trademark initials they stamp in the corner to identify it. I was so amused to see Aunty retreat into the world of throbbing bosoms and hardened members I had to snap a pic. For posterity.

The moment reminded me of my childhood, how all the Nigerian aunties who came to visit us, women of all ages, careers, religions and marital status were united by one thing. The well-thumbed Mills & Boon novels they all carried in their handbags. Apparently M&Bs were passed around Nigerian boarding schools about as enthusiastically as Judy Blume’s Forever had circled around my South London comprehensive.

The popularity of the romance genre makes complete sense to me. It’s a genre built entirely around women and their desires. It’s wish fulfilment on steroids. That African school girls in the 1960s were able to relate to the romantic struggles of white women in continents they had never visited speaks to the commonality of love and lust.

The popularity of romance books has endured remarkably well through the decades. Just think, Harry Potter took 11 years to sell 400 million books. Mills & Boon shifts 200 million books every year. A copy is sold every 6.6 seconds across 100 markets and 26 languages.

Alas, the other thing that has endured through the years is the glaring whiteness of the genre. In 2017, out of every 100 romance novels released by the big five publishers, only 6.2 were by authors of colour.

In April this year, a discussion broke out on Twitter amongst American romance writers about the difficulties black romance writers face in the publishing industry. The conversation was sparked by the RITA awards, an award for excellence in romance writing awarded annually by the Romance Writers Association (RWA).

A discussion that began with the lack of RITA finalists of colour led to some astounding truth-telling about the unequal treatment black romance writers experience when working with traditional publishers. 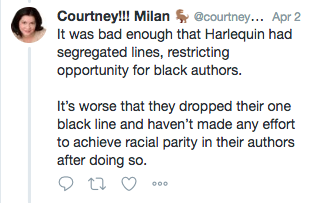 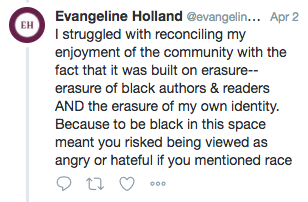 You can read some of the threads here:

Courtney Milan’s thread on the experiences of authors of colour at the 2016 RWA conference.

Adrienne Mishel on what authors can do to create change

Evangeline Holland on the decades-long battle for diversity in romance publishing fought by the late author, Monica Jackson

The discrimination against black authors is even more remarkable when you consider that their books sell. They don’t just sell, they SELL! The Ripped Bodice, the only bookstore in North America dedicated to romance novels has revealed that 6 of its 10 bestsellers in 2017 were by authors of colour.

I mean, seriously! It’s like traditional publishers are trying not to make money.

But it’s not all doom and gloom. Hopefully the frank discussions that have been taking place about racism in romance publishing will lead to changes. Already the Ripped Bodice is making a habit of regularly calling out publishers on the lack of diversity in their output. 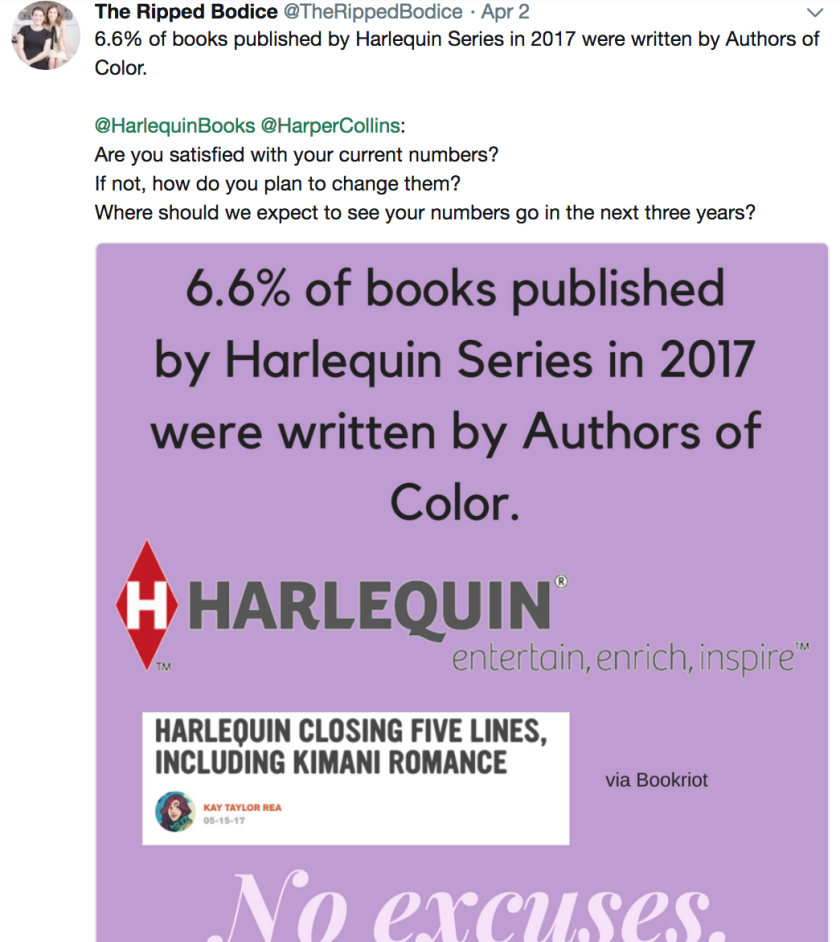 Bim Adewumni has written a terrific article on the chain of black women shaping romance at Kensington Books. The newsletter Brittle Paper, created to explore African literature, regularly highlights the latest updates in the African romance world. Independent publishers like Ankara Press, Genesis Press, Nolly Books and Kwela Books offer alternatives to the big five publishers. And then there are the publishing disrupters, entrepreneurial writers like Christina C Jones who by self-publishing their work are pulling up their own seat at the table. The romance revolution is well underway. Readers will be all the richer for it.

Have you seen my list: 24 Black Romance Novels You Absolutely Must Read? Go read it now!