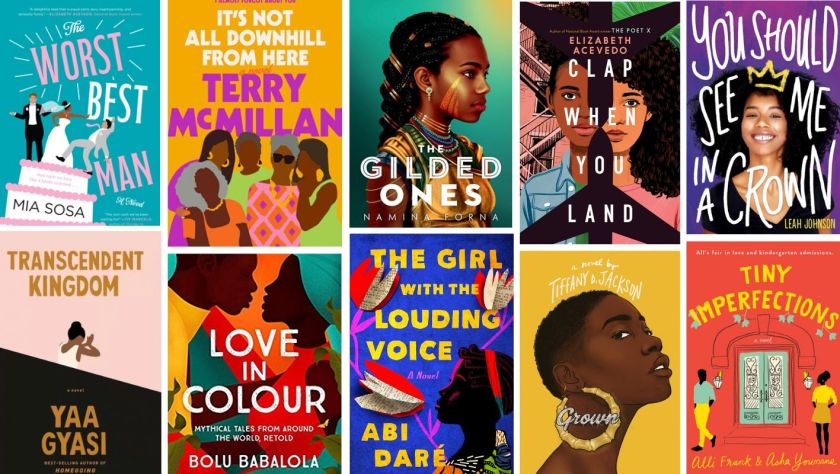 It’s 2020 people! Time to get rid of all the books that have been clogging up your ‘must read’ pile and replace them with shiny new ones. Yes, that is exactly how reading should work. Here are 20 books by Black authors coming out this year. Go forth, read and spread the good news.

Ella sees things. Things that have not happened yet. After her brother is locked up on racially motivated charges, she has to decide whether to use her special abilities knowing she could start a revolution that could burn her city down.
January 21

2. Not So Pure and Simple – Lamar Giles

Del joins a purity ring club to get closer to his childhood crush. He doesn’t expect to learn more about himself and have to reflect on questions about what girls want from boys and what it means to respect them. This important story of masculinity is something everyone can learn from.
Jan 21

Carolina Santos is DC’s hottest wedding planner. It feels like bitter irony when she is left at the alter on her own wedding day. She sucks up the pain, soldiers on and feels like life is rewarding her fortitude when an incredible business opportunity comes her way. Until she discovers that seizing the opportunity means teaming up with the man who encouraged her fiancé to jilt her, a man she hates with the fire of 10 suns, the worst best man in the world.
Feb 4

4. The Girl With the Louding Voice – Abi Daré

Adunni is 14-year-old Nigerian girl determined to get an education. It’s the only way to get a “louding voice” her mother has told her ie the ability to speak for herself and decide her own future. Instead, her father sells her a local man as a third wife. She runs away to the city and learns to stand up not only for herself, but for other girls.
Feb 25

President Marien Ngouabi is brutally murdered in Brazzaville in 1977. His assassination changes the life for a young boy and his ordinary Congolese family forever.
March 12

6. The City We Became – NK Jemisin

Every great city has a soul. Some are as ancient as myths, and others are as new and destructive as children. Turns out New York City has six. And it will take five New Yorkers working together to defend their city from an ancient evil in the first book of this new series.
March 24

7. It’s Not All Downhill From Here – Terry McMillan

Loretha Curry is blessed. She is turning 68, has a booming beauty-supply empire, a squad of life-long friends and a husband who still has moves. Her life is as good as ever. Until she loses someone close to her. She must summon all her strength and resourcefulness to keep her life together and keep on thriving.
March 31

Children born on the 29th of February – Leaplings – are very rare. Rarer still are Leaplings with The Gift – the ability to leap through time. Elle is 12 when she uses her Gift to leap to the year, 2048. There she receives a message; Leaplings are disappearing, nobody can be trusted. Soon she is racing against time, fighting to save the world as she knows it – before it ceases to exist…
April 2

Josie Bordelon is 39. Her career as a sought-after model and the ‘it’ Black girl of the 90s is behind her. Now she works at one of the best private schools in San Francisco and tries to keep her 17-year-old daughter from making the same mistakes she made. But history has a way of repeating itself and with a daughter determined to live the life she wants and a best friend doing her best to break Josie out of her sex sabbatical and get her dating again, life is spinning off on its own trajectory.
May 5

10. Clap When You Land – Elizabeth Acevedo

When Papi dies in a plane crash, the two families he kept secret come to know of each other. Camino Rios in the Dominican Republic and Yahaira Rios in New York City must find a way to grieve for their father while dealing with a new-found sister. This dual narrative novel, written in verse explores loss, betrayal, forgiveness and family.
May 14

11. The Gilded Ones – Namina Forna

When 16-year-old Deka’s blood runs gold instead of red at her village’s ancient ceremony she faces a fate worse than death. But then a woman comes to her village offering her an escape. She can fight for the emperor in an army of girls just like her, girl with rare gifts. And they are the only ones who can stop the empire’s greatest threat. As she travels to the capital to start her new life, Deka comes to realize nothing and no one is what it seems.
May 26

After a bad break up, 25-year-old Osayuki leaves behind everything she loves in London to return to Lagos, Nigeria. Drawn by the transformations happening in the fashion industry there, she accepts a job at House of Martha as their Head of PR. While waiting at Milan airport for her connecting flight to Lagos, she meets two fellow returnees. After the plane lands at the Lagos airport, they all go their separate ways but their lives will intertwine again and change the course of Osayuki’s life forever.
May 28

13. You Should See Me in a Crown by Leah Johnson

Liz Lighty believes she’s too black, too poor, too awkward to shine in her small, rich, prom-obsessed town. When the scholarship she was counting on to pay for college falls through she decides to try for the grant that comes with the prom crown. It’s a long shot. Like aiming for the moon. And things get more complicated when she falls for one of her prom queen rivals.
June 2

14. Love in Colour: Mythical Tales from Around the World – Retold by Bolu Babalola

Love stories from history and mythology are retold with new detail and energy. From Greek myths and magical Nigerian folktales, to the ancient stories of South Asia. Babalola is inspired by tales that truly show the variety and colours of love around the world.
July 9

Homecoming was magnificent. Gyasi’s latest novel tells the story of a family from Ghana struggling to make a home for themselves in small-town Alabama.
July 14 2020

The poet and first young people’s laureate for London combines poetry and original photography to explore the trials, tribulations, dreams and joys for black boys in Peckham, South-East London. How do the concrete housing estates, homegrown music and gentrifying neighbourhoods shape them? A lyrical portrait of identity and black boyhood in Britain.
July 30

British cellist Sheku Kanneh-Mason entranced the world when he performed at Prince Harry and Meghan Markle’s wedding. Then the world discovered he has six equally talented, classically trained siblings. His mother, Kadiatu Kanneh-Mason, a former university lecturer shares her story of raising seven children on an ordinary income, via a regular state school and how her family became “Britain’s most musical family”.
Sept 3

Enchanted is an aspiring singer, struggling with her family’s recent move to the suburbs while trying to find her place as the lone Black girl in high school. When legendary R&B artist Korey Fields spots her at an audition and takes a shine to her she’s dazzled. Her dreams of riding his star to the top of her own professional career quickly dim when he turns out to have a dark, controlling side. But things get infinitely worse when she wakes up with blood on her hands, the police find Korey’s dead body and all signs point to her.
Sept 15

Four talented Ethiopian musicians compete to see who can sing the best Tizita (Ethiopian blues). The contest takes place in an illegal boxing hall in Nairobi, Kenya. A Kenyan journalist covering the story follows the musicians back to Ethiopia in order to learn more about the Tizita and their lives. There he discovers that behind each musician, there are layered lives and secrets, love and beauty.
Oct

Mysterious happenings and unlikely quests about in a novel about shamanism and desire and friendship.
Dec 5