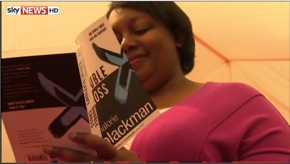 The Edinburgh International Books Festival was held last weekend and in her capacity as children’s laureate Malorie Blackman did the media rounds talking up UK books, but also highlighting the lack of ethnic diversity in children’s publishing.

She told Sky News that a lack of diversity in books can discourage children of colour from reading and make them feel excluded:

“I think there is a very significant message that goes out when you cannot see yourself at all in the books you are reading.

“I think it is saying ‘well, you may be here, but do you really belong?”

A sub editor at Sky decided to title the story with the provocative and inaccurate headline: Children’s Books ‘Have Too Many White Faces’ says Malorie Blackman, which was all the invitation the internet trolls needed.

Malorie received an avalanche of racist criticism on her Twitter feed.

And responses to the story on Sky’s website vacillated between nasty and ignorant:

Malorie complained to Sky News and they changed the headline to reflect her actual comments, but the damage was done.

It’s remarkable the number of people who took that first headline at face-value, didn’t bother to read the story and decided that an expansion of ethnic diversity in publishing would somehow mean the marginalization of white characters and authors.

The ignorant commentators aren’t the real issue, neither is Sky News’ clumsy attempts at sensationalism. All of that simply distracted us from Malorie’s key point, that children’s publishing in the UK is overwhelmingly white and does not reflect the population.

“There is still an attitude among some editors and booksellers that they can only sell a book to the people they decide a book is aimed at,” Malorie told the Guardian newspaper last week. “But being British means a lot of things and especially at the moment, people need to feel they have a stake in society. A brilliant way to do that is through books.”

Such sound logic. Particularly now, when it seems the entire world is fighting over ideologies and we could all do to walk in our neighbour’s shoes and see a different perspective. Publishers will say that black books don’t sell, that black children don’t read, that white children aren’t attracted to books with characters that don’t look like them on the cover.

Utter rubbish! Children will read anything with a good story. Malorie’s Noughts and Crosses has sold millions across the globe proving the point. Children will read outside of colour lines, gender lines, religious lines if we teach them to. And they’ll carry that open-minedness into adulthood. But they need variety on the bookshelves to develop those habits and that means authors, commissioning editors, illustrators, marketing teams, booksellers and parents need to be intentional about creating a publishing industry that reflects the diversity of the world we live in.

I hope Malorie will eventually come back to Twitter. We need her voice to keep speaking up about the dangers of a single story.